Sometimes a spontaneous timeslot appears to fit in a round of Infinity, which is supported quite well by the TTS and the current community. So it appears that I got a game in against Masloo, a polish player I already knew a bit from the ENTE. 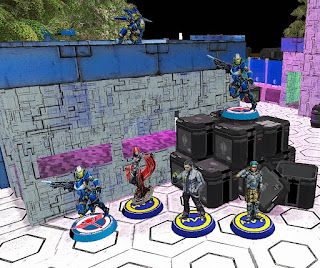 Since it was an additional game and I had already scheduled some future games with DBS, I took the chance to make some further tests with Starmada, while Masloo brought White Company to the field. We agreed on Unmasking, since it is always an interesting mission. 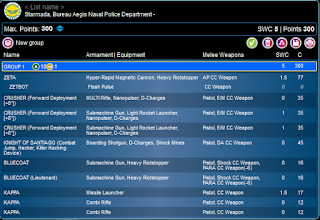 The Crusher is an amazing unit so far and I really like the concept of a AD HI KHD in form of the Santiago, so I wanted to push this to its limit by taking the Santiago and three Crushers to have the biggest possible mid field appearance. Even with just an okay-ish sculp on the horizon, the Zeta will be bought and since it makes the list more extreme and adds a new layer of defense, this was his premiere here. As it was planned by someone, a defensive core of Kappas also fit in and completed the list.

In general this list should simply gun things down or slow them down as long as possible, while the Crushers and later the Santiago click the consoles, take some sectors or score whatever necessary. A careful deployment of the core-team is important here to secure the orders as long as possible. 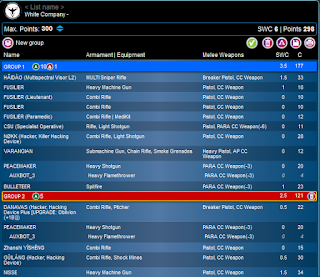 This was finally a list using the possibility of PanO shooting and smoke, together with the flexibility of YuYing units. The defensive core team with the MSV2 Haidao works as backbone for the Bulleteer and the Nisse, supported by the Varangian. The Nokken together with the Guilang should do the objective-part here. As Masloo said, the double Peacemaker was something to try out here, what can be a massive problem on some maps and is a big failure on other ones. But with the new hacking, the combination of HSG, HFT on the Auxbot and the repeater to consider is a quite good package. Together with the Danavas, most of the threads can be addressed either by the Nisse or by the linked Fusilier HMG. 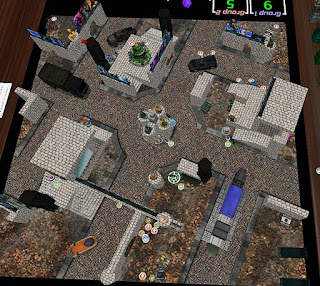 We shuffled a while through different maps and Masloo fianlly stayed with this one. I was fine with that, since there were some places to hide my Zeta, but on the other side there were some quite long firelanes, which needed to be taken into account. The consoles needed to be rearranged a bit to fit with the terrain.

I win the Lt-roll and choose to go first, since the DZs are not that different in cover and spots for link-teams. I should deploy first in the south.

I am struggeling a bit with the placement of my link, since the ML should cover as much space as possible, but everyone else should be as safe as possible. So I drop the ML in a open gate in the center and place everyone else in the nearby room. The multi-Crusher starts in a horrible place on the left, while the two LRL-Crushers take the center and the right, since I saw more potential for their LRL there. My designated target is stuck on the left in a dead end, where nobody can land behind it, while one decoy is placed in a similar place on the left. I forgot about the position of the other decoy.

The left sees a camo-marker, a Bulleteer, a Nokken KHD and a Nisse HMG supported by a Varangian together with a Danavas Hacker in the back, while the right is covered by a Fusilier-core with a Haidao MSV2 MSR overwatching the center. It is supported by a Fusilier HMG and protected by a HSG Peacemaker, guarding two HVTs, while the third one is on the central objective.

I place my Zeta covered by the cargo-truck on the right, while a second Peacemaker with HSG appeared next to the first one, hinting a trap or a valuable target there.

My right Crusher is nominated as datatracker, since he can reach each HVT, while the Nokken KHD gets the other datatracker.

I start with repositioning the Zeta, dragging him into the center and dropping the Haidao in one shot. He takes a position behind a wall he can see over and overwatches now nearly everything. The central and the right Crusher advance, fail on each console once and retreat. I take a second attempt on the right one and succeed, discovering a decoy among the guarded HVTs on the right. The Crushers and the Zeta enter suppressive fire.

The Varangian sets up some smoke on the left, which is used by the Nisse to gun down my datatracker and force my Zeta into better cover. The Fusilier-link is refilled, but the HMG also fails on the Zeta. Everything retreats a bit and the Nisse enters suppressive fire.

My Zeta manages to climb the high building on the left without any problems and starts blasting the Doc and the Varangian from this elevated position. To proof the designated target behind the Peacemakers, the mid Crusher activates the console and check the decoy next to it. Everyone retreats and goes back into suppressife fire.

Everything evolves around the Zeta, which finally gets his first wound from thy Nisse HMG. The Bulleteer advances, taking him down but is wrecked by my ML Kappa in the progress. Before this happens, a CSU and the Fusilier HMG are shot by the Zeta. Finally the Nisse takes revenge and drops my ML.

I am in good shape, but I need to score some points here. The mid Crusher finishs the Decoy in the center and reveals the designated target by clicking the left console. For this, he needs a ton of orders, so I am down to one regular order. The Santiago drops behind the Peacemakers, outside of hacking range and with the last order, I land one BSG shot on the designated target.

Quite uncovered, the Santiago is fried by the Nokken KHD, which also drops my central Crusher. He manages to activate the left console to discover the Decoy on the left. There is no way now to get everything valuable done, so the game ends.

With my datatracker off the table, Masloo scores one OP, while I score seven. Over the course I rolled some crits and got lucky with the saves of the Zeta, which shrugged of really a lot with his Arm 8. Here my position in the center, overwatching nearly everything, added up to a really tough spot for Masloo, from which he can't recover properly.

My list-plan totally worked out and the Zeta performed outstanding. But also three Crushers are something to consider, since they will perform if they are deployed properly. If that point is done successful, there is not much what could be problematic for them. Even if something had managed to go for my link-team, the Bluecoats should have been able to reduce the damage by gunning it down. The KHD was a high paying risk here. If he would have failed his roll, the designated target would have been alive with how the rest of the turn turned out. Being a KHD is a bit of a downside here, since you not only have to look out for LoF, but also for hacking zones, which sometimes limits the available space a lot. Since he has no tinbot, it would be a real shame to have him pinned down by hacking directly. Generally I am a big fan of Santiagos and of AD troops, too. But maybe I need to reconsider his position as AD hacker here.

Masloo was quite limited by the map here, since it had no places to deploy the second Peacemaker reasonable. A more dense one would have restricted my potential a lot and increased his tools, since his Varangian would have gained more use and the Peacemakers could simply sacrifice themselves for my Crushers in close quarters. Maybe the Guilang on the left could have gone for that Crusher and later eat through my order pool. But that only would have limited my actions by leaving him in a pinned position.

While we now know how to set up interesting maps for competitive play or regular games, everyone may reach a point where some spice need to ...